The series is based on the observation of people crowding together on a beach during the summer holidays, which the painter, Sotiris Lioukras, spends in the same place for many years. On these holidays the notepad for the sketches is among the core items of his toolkit. The camera complements the recording by freezing the images so that they can be retrieved from memory and solidify (or freeze) the memories from those great days, a crack in the regularity of the annual work cycle. The artistic rendering, however, exceeds the photographic recording; it becomes processed image, which is proof that reality is experienced through all of our thoughts and emotions.

On an island: an ancient quarry, two archaic temples, two early-Christian basilicas in a small pine-covered peninsula becomes the theater in which the play of our holidays will be staged. The paintings raise the question: Why does one go to the sea? To enjoy, as all senses are stimulated, the color of sea and sky, the sound of waves, the smell of pine and iodine, the saltiness on the lips, the cool feeling of water. The sweet fatigue that comes from sea activities is complemented by the indolence of sunbathing.

For all these reasons an excursion to the beach is organized. The car gets loaded with all that is needed and the vacationers arrive about the same time, rushing and hasty to spend a happy day close to nature. Nature which, although all-powerful and dangerous, is specially arranged for them and is now tamed, subdued, adapted and more importantly developed and marketable.

The images that emanated from the painter’s vacations are themselves a kind of “vacation” from the set course of his artistic quest. They emerge as memories of summer experiences through the black surface of the painting, insinuating the dialectical relationship between the light and the shadow that the summer drives to its extremes. These two components create the forms disclosing their peculiarities, even when some of their aspects remain dark. The colors have the color intensity of a summer day, but they gradate reaching as far as a monochromatic rendering of the forms. Bathers are roughly sketched but with a unique realism that emphasizes the essential detail, reflects, comments, perhaps even satirizes, but without idealizing or embellishing.

Sotiris Lioukras’ paintings, although they originate from snapshots, they refer to general concepts and they comment the human condition: The circle of adults around the baby in the sand as a kind of cycle of life. The heavy figure of the elderly bather with her back to the sea among the silhouettes of younger women who surround her and head towards the liquid element, as the inevitable path of decay. The elderly and the younger couple with the man and the woman spreading oil on each other’s backs as companionship, role play between the sexes and its transformation with the passage of age. The male figures standing awkwardly on the yellow sand as if they have emerged from the light or as if the darkness is about to swallow them, as “fruits of the sea” or as purposeless “Citizens of Calais”. Children with the ball and the interrupted game as quest and exploration. The dense groups of bathers who seem occupied with settling on the beach as alienation from nature and involvement with the insignificant.

Bathers charge, they occupy the beach, they swim, play, eat, bask in the sun all day and when the sun goes down and in the shadow of the hill the colors fade, they slowly start to withdraw like a defeated army retreating and on the battlefield remains a cut sandal, a forgotten hat, a watermelon rind, an empty bottle of sunscreen, traces more or less ephemeral of the expectation of a day of enjoyment. 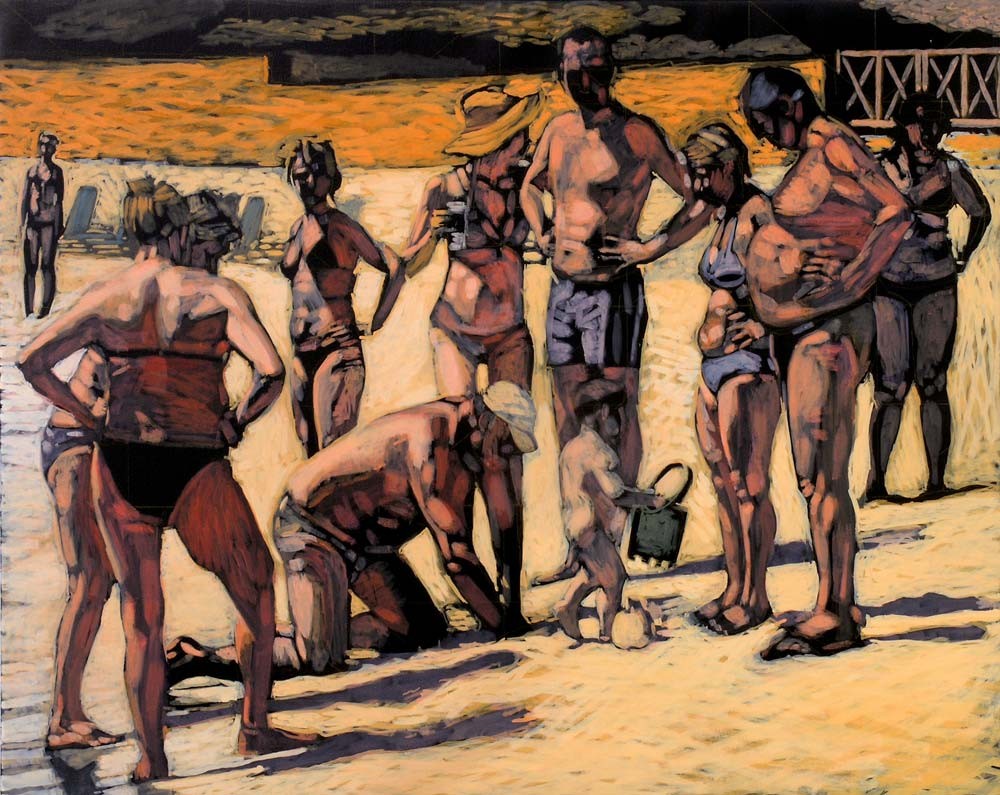 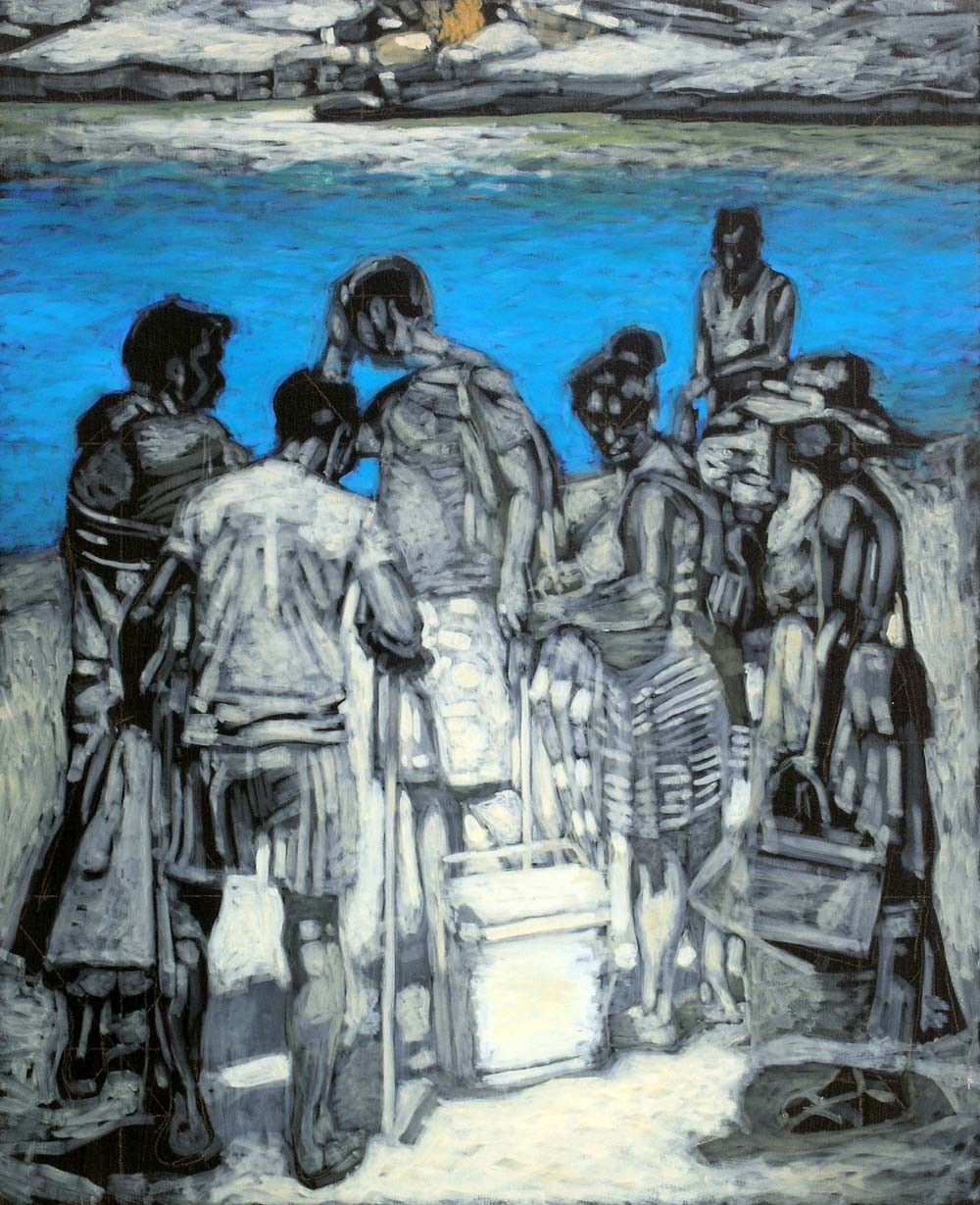 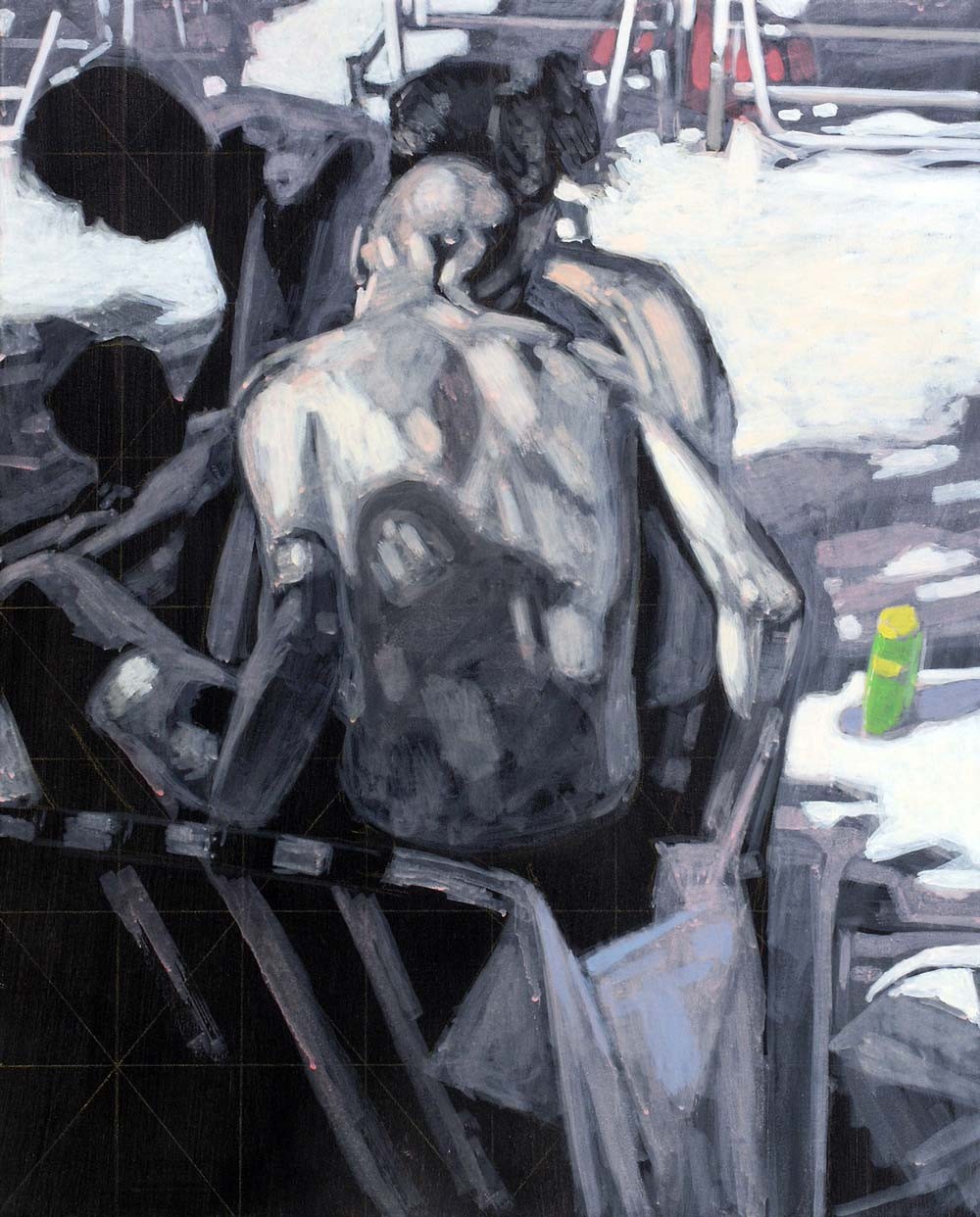 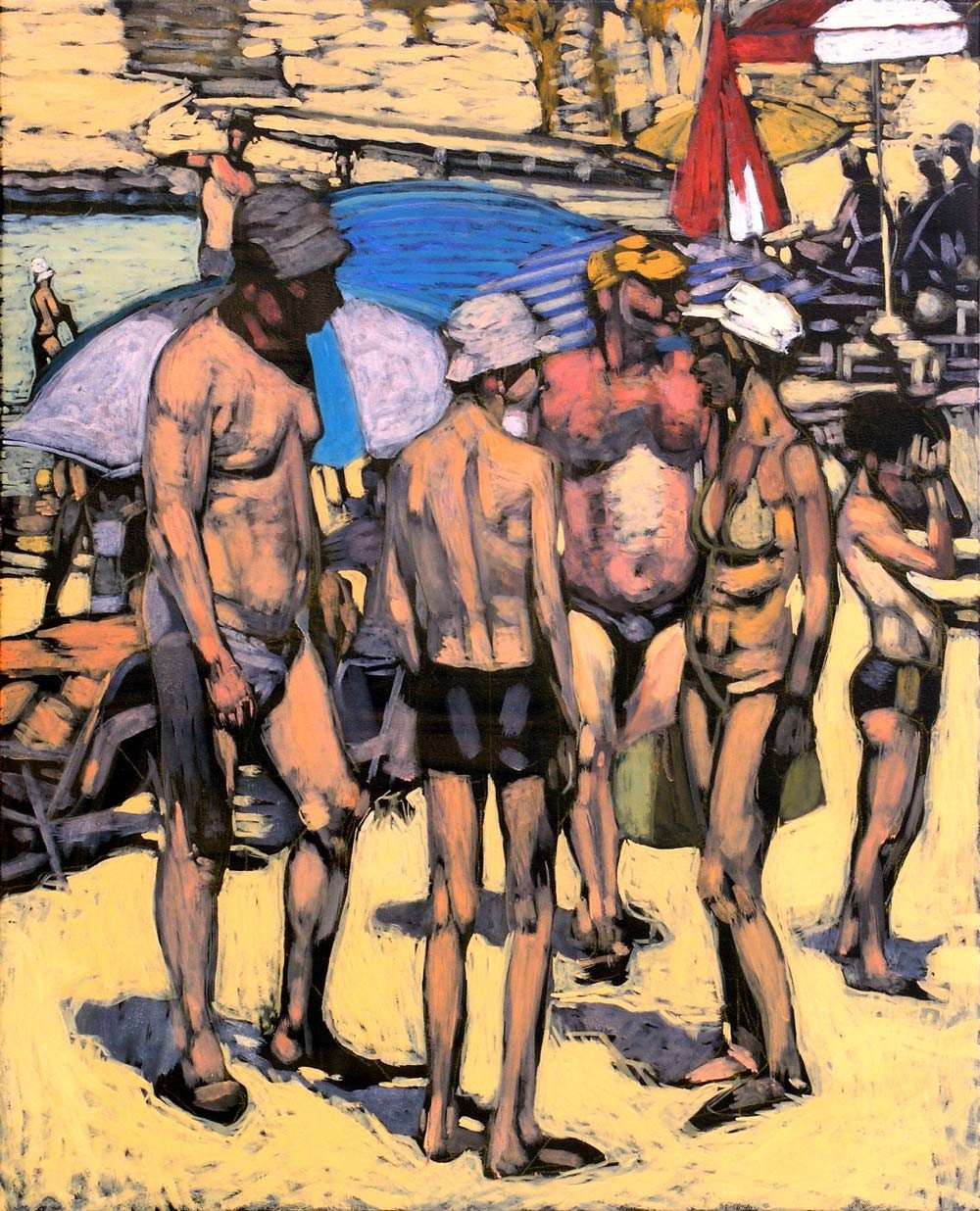 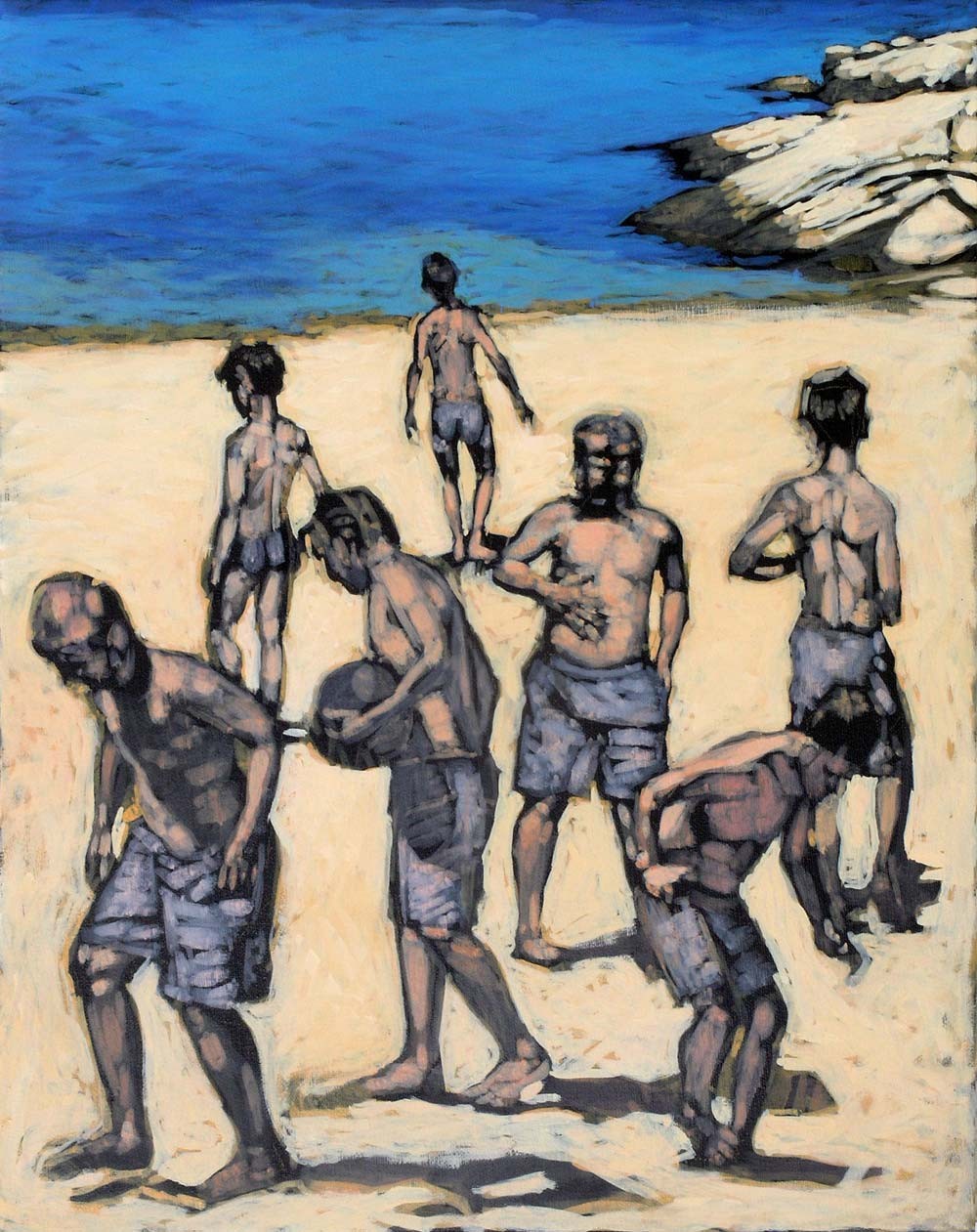 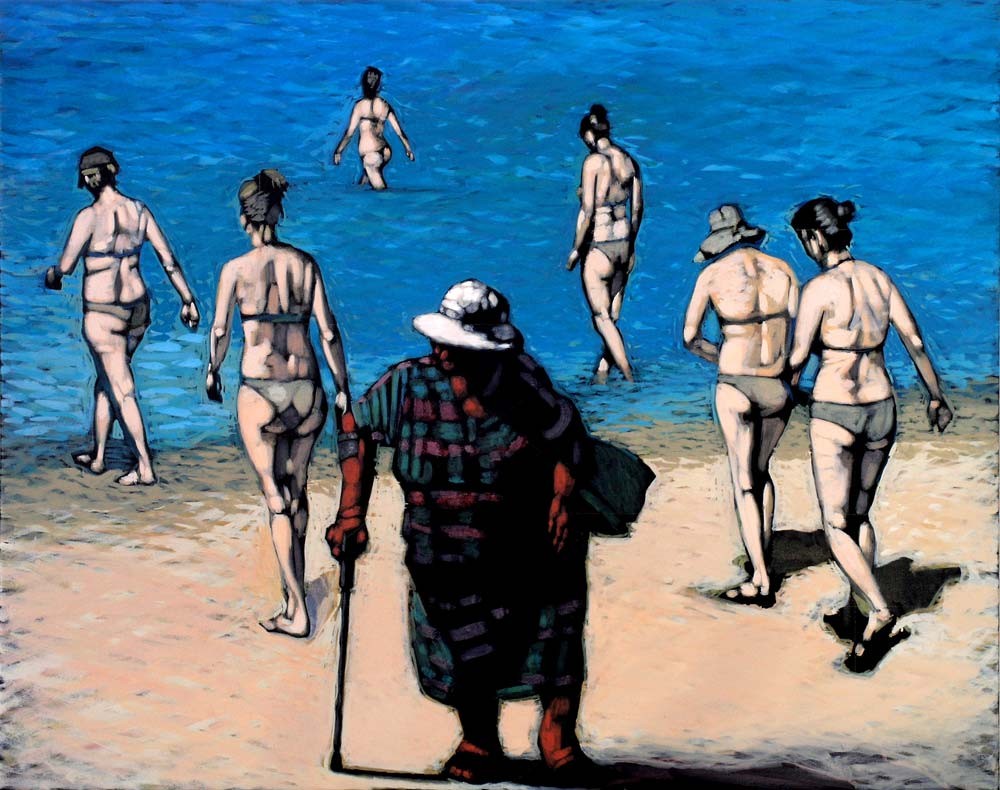 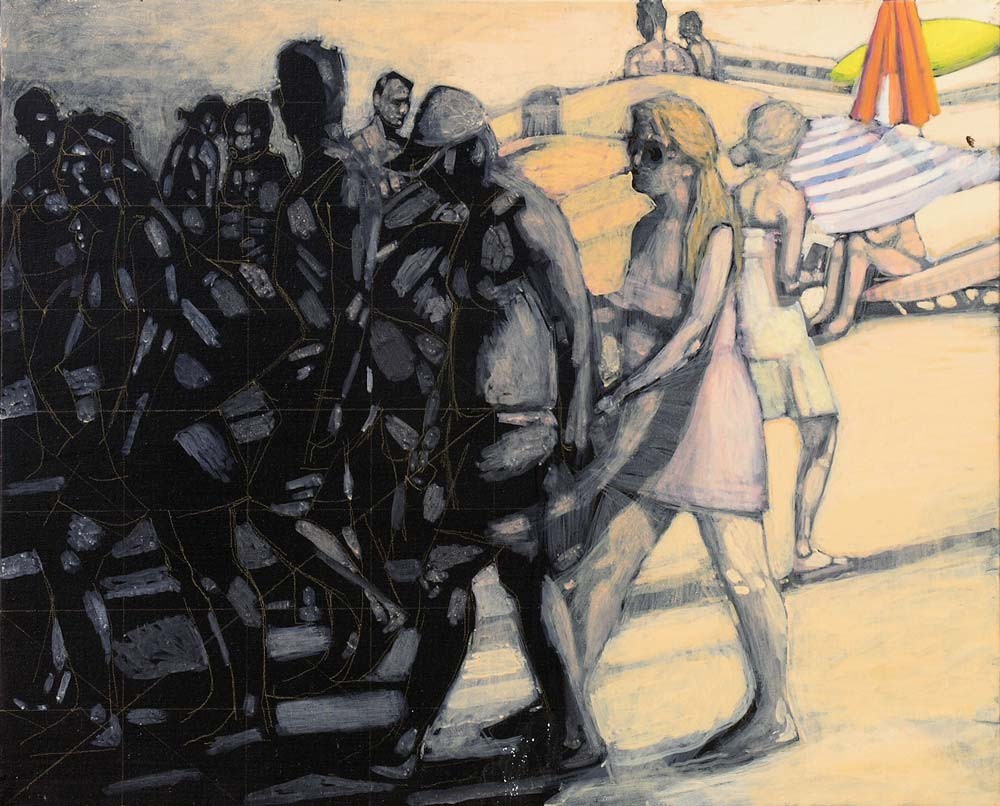 Stelios Koudounaris SS 19 Collection April 22, 2019 The new summer collection of Stelios Koudounaris radiates a sense of freedom, a source of enthusiasm, a naive dynamism, a spontaneity, some characteristics of youth, during which nothing really scares…