Its pre-fabricated peaks and troughs create trenches for rooftop planting, softening the volume, establishing a connection with the leafy surroundings and creating pleasing views from the floors above. From the garden, the roof trenches are out of sight, giving the immediate effect of a simple concrete slab, which contrasts with the texture of the original building.

The underside of the new roof is exposed to create the living room ceiling, its pronounced ‘beams’ created by the sunken roof planters above. The motion of the waffle ceiling creates a satisfying rhythm, which also offers a logical position for a substantial skylight that traverses the full width of the extension. This strip of natural light illuminates the kitchen, which would otherwise be overcast by its position, set back within the footprint of the original house.

‘We wanted to create a volume, whose form would be meaningful both inside and out.

Inside, the motion of the roof slab breaks up the minimal surfaces of the living area. Outside, it creates appealing views through hollows and humps, which bring nature and concrete into immediate proximity.’

Although the living and kitchen areas are open plan, a selective palette of materials has been used to visually define these spaces and create an atmospheric contrast. In the living area, the materiality of the ceiling is echoed in concrete flooring, which stretches to meet the threshold of the kitchen. There, it creeps up the face of the kitchen island and turns back on itself to create a sculptural addition, in the form of a breakfast bar. The boundary of the kitchen is marked graphically, by a transition into rich monochromatic blue that floods the surfaces of the space, including its resin floor. The concrete appears to force its way into the kitchen’s footprint, creating a pathway around which the resin floor wraps.

Within the kitchen, monolithic volumes have a masking effect, concealing ample storage on one side and a cloakroom on the other. This allows the monochrome quality of the space to take the lead. Door edges are cleaved back to create geometric insets, which form handles, and whose elongated shape are repeated on the ceiling to create embedded lighting.

‘The project was an opportunity to create a journey of unexpected moments, through balanced contrasts embedded in the narrative.

The entrance hall, with its original tiling, gives way to an immersive grasp of solid colour within the kitchen. This then opens onto the more industrial living space, whose lightweight atmosphere opposes the weight of the concrete roof, enhancing its floating quality.’ 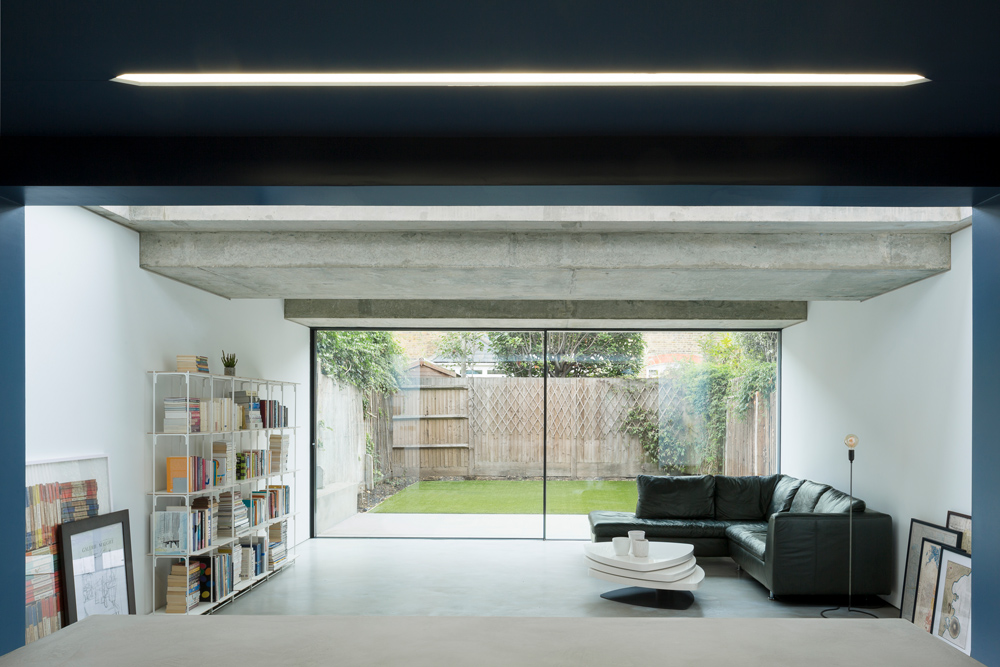 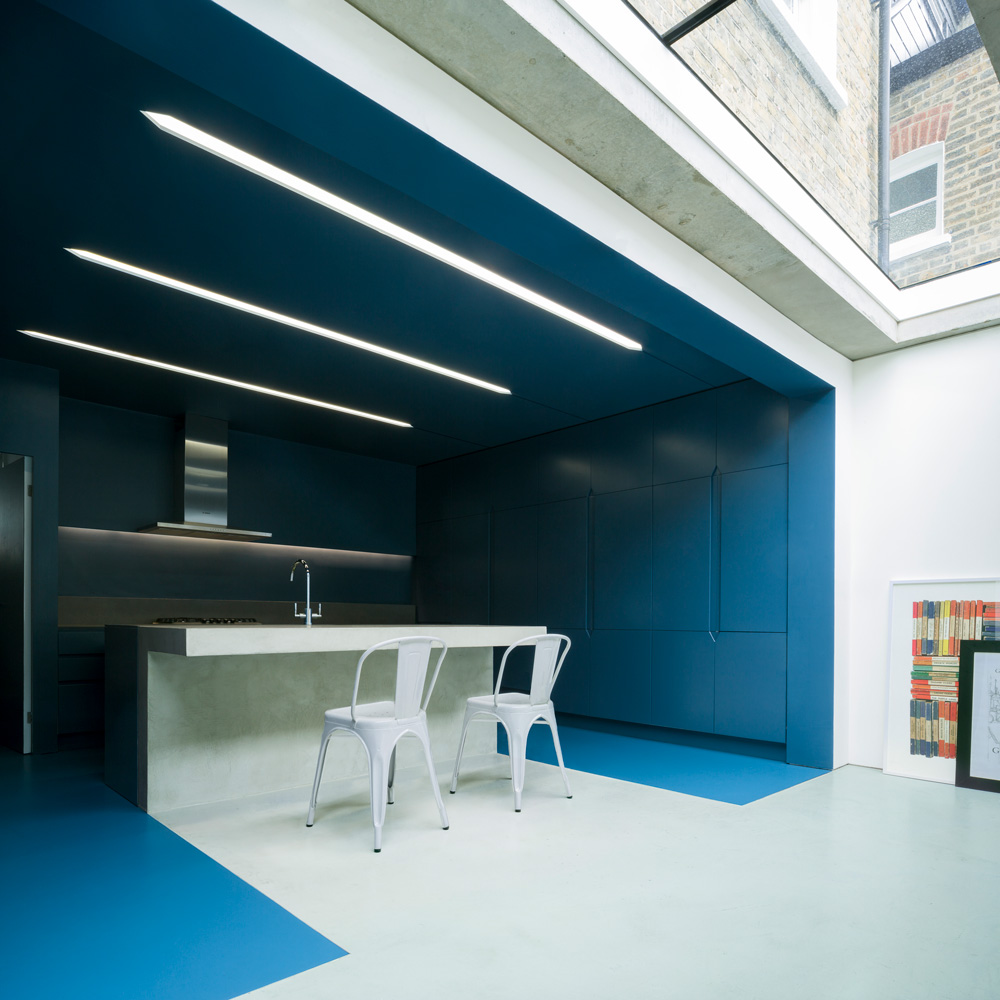 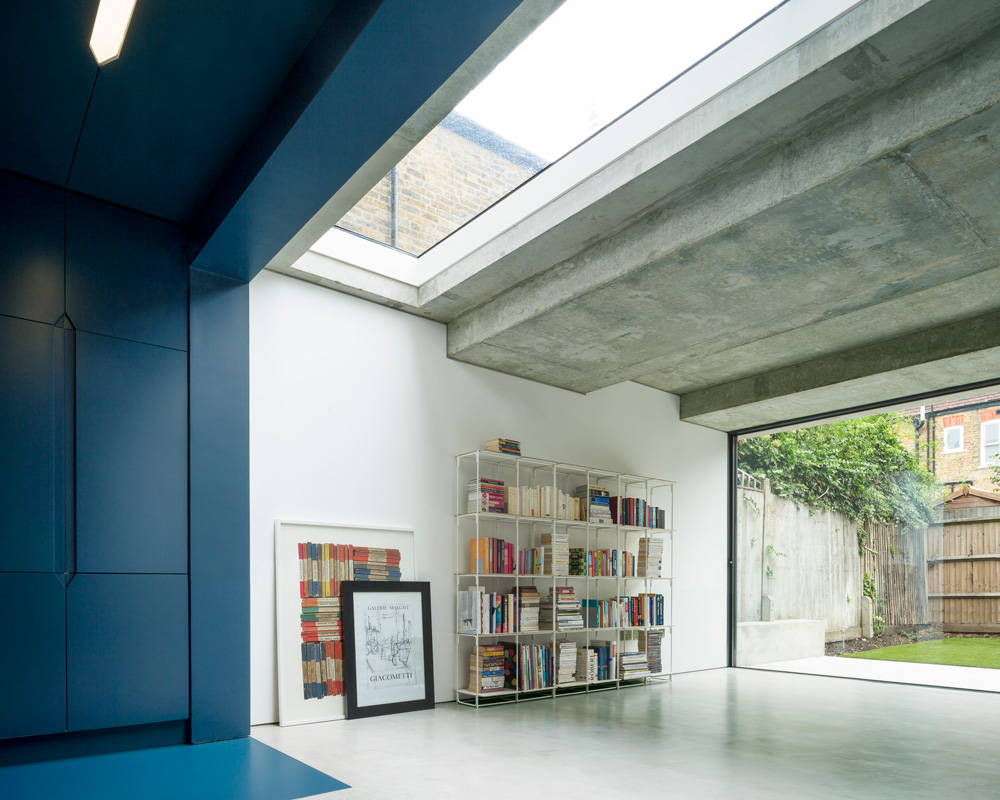 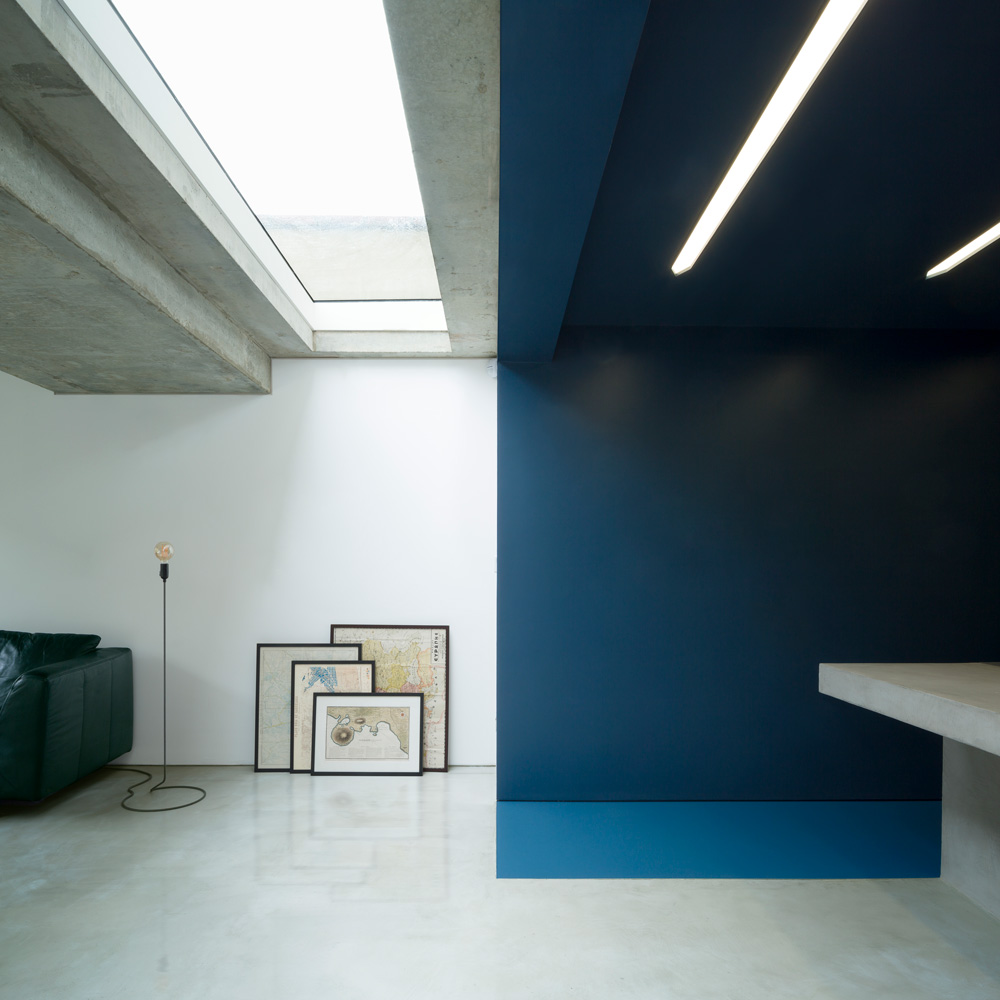 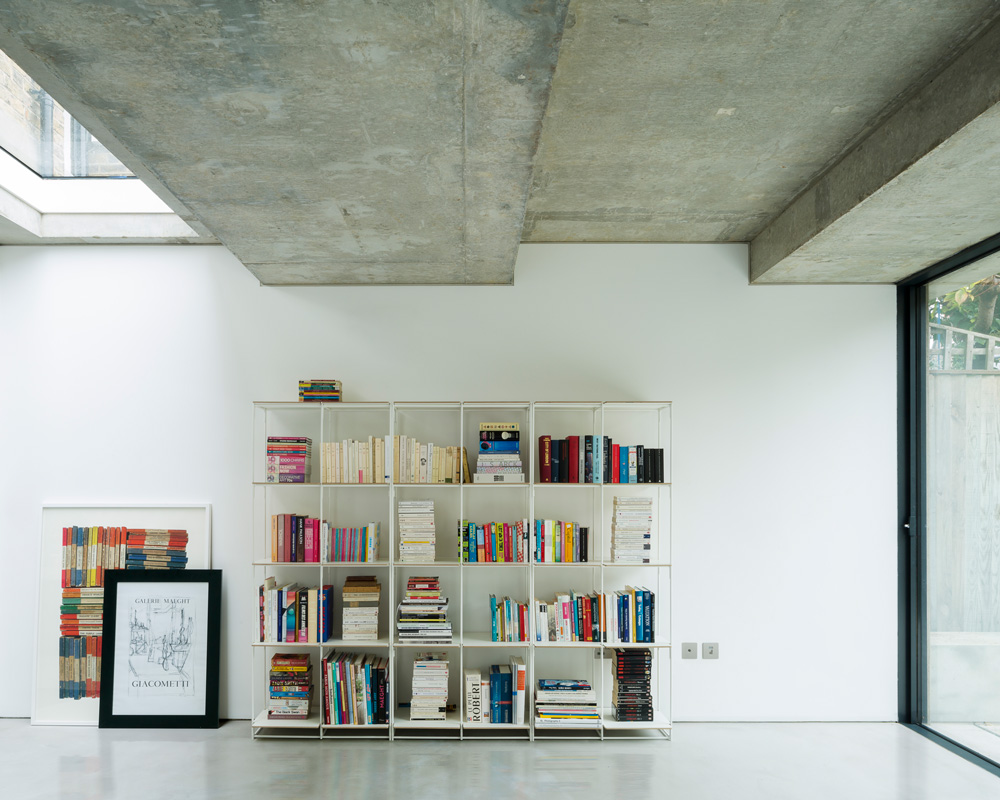 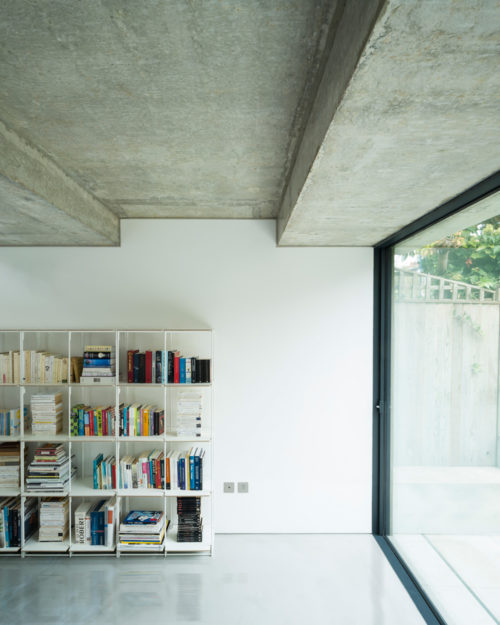 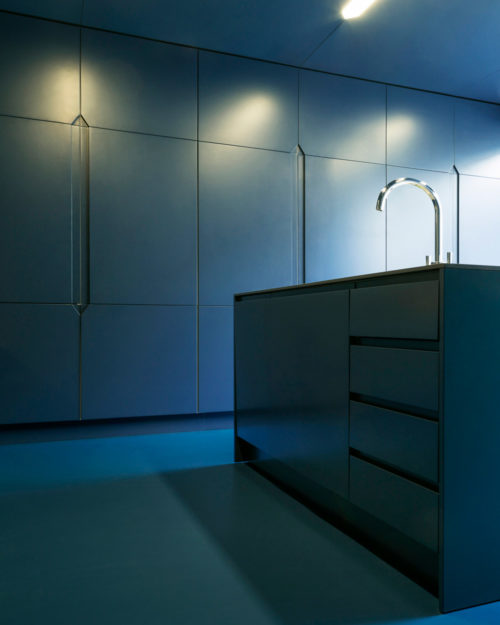 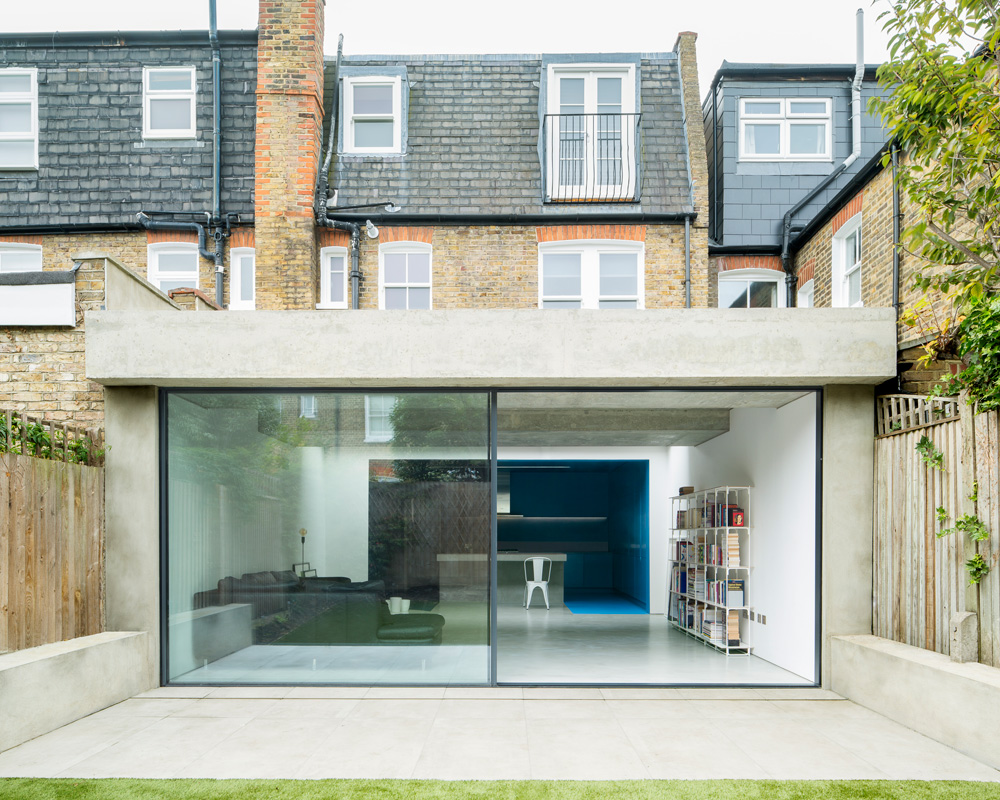