The Homeric Poems Hotel is located in the neighbourhood of Firostefani, on the Greek island of Santorini, on the edge of the steep Caldera. The Interior Design Laboratorium worked on the renovation of three suites, which are part of a traditional captain’s house that stands as a separate building of the hotel’s premises.

The suites are inspired by the story of the building itself and of the island’s past. Memories of the sea are sheltered within the interiors of the high ceiling, two-level space. Souvenirs brought back from travels serve as reminders of other countries, as well as the memories of the traveller himself, adding to the atmosphere.

The Captain’s house was divided into three separate parts, all with their own entrance via the main façade. In the interior, the communal and private areas are located on different levels. The pre-existing connection on the ground floor has been maintained, in order for the suites to be joined if so requested.

Simplicity, a fundamental principle of the Interior Design Laboratorium, is the dominant feeling from the moment the traveller sets foot in the suites. The sense of comfort, together with the perception of the world travelled Captain, is imprinted in the interior details. The relaxing cushions, the thick mattresses, the eclectic décor, made up of a few unique elements, create a simple and charming space.

Bronze, wood, rope, leather, thatch and durable textiles, which were inspired by the naval tradition, are brought into the design. The custom-made furniture, following the same aesthetic philosophy, was created with particular detail on the finishings to evoke a finesse of the past, able to meet contemporary aesthetics and the character of the area. Decorative elements, such as nautical maps, compasses, binoculars and books, complete the interior atmosphere as mementos of distant places and memories of adventurous travels.

Two vertical sail cloths, inspired by the boat’s mainsail, divide the communal exterior space, forming three separate dining areas. The colours of the exterior where chosen according to the unique Caldera landscape. The exterior is built from red and black Santorini rock, the traditional building material and elements characteristic of the island. Lounge furniture was placed on the edge of the veranda, the point from which one has an unobstructed view of the caldera and the volcano. A point where one can imagine floating above the landscape’s deep blue colour and feel that the journey goes on. 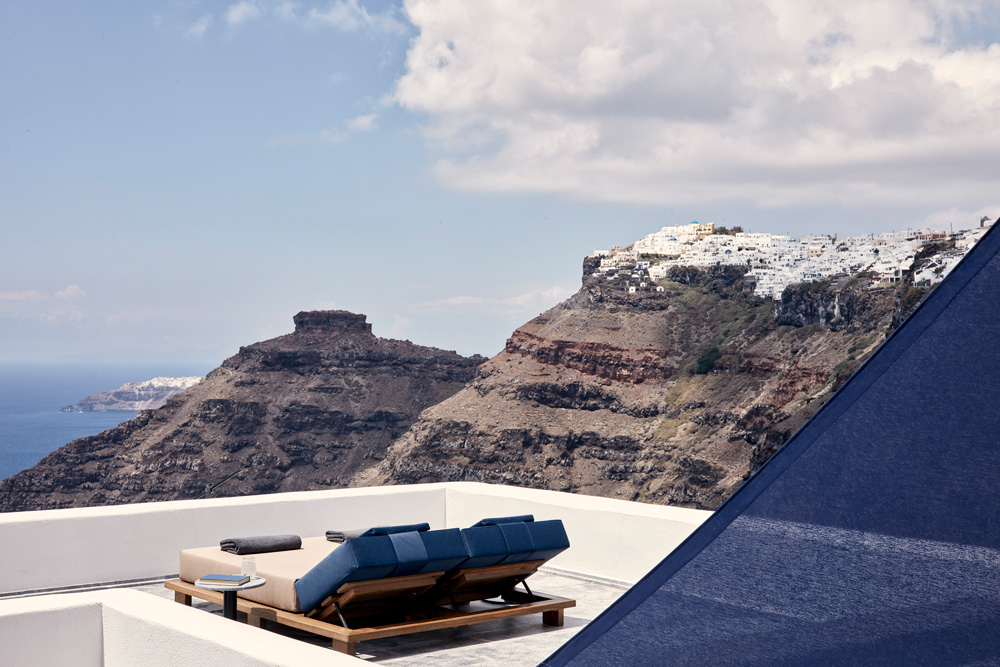 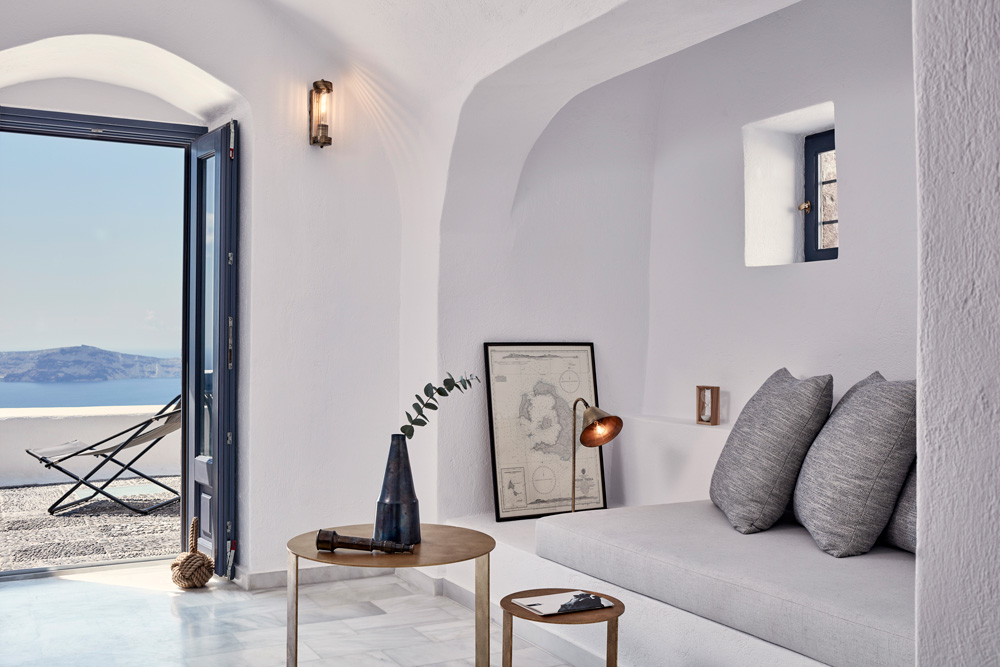 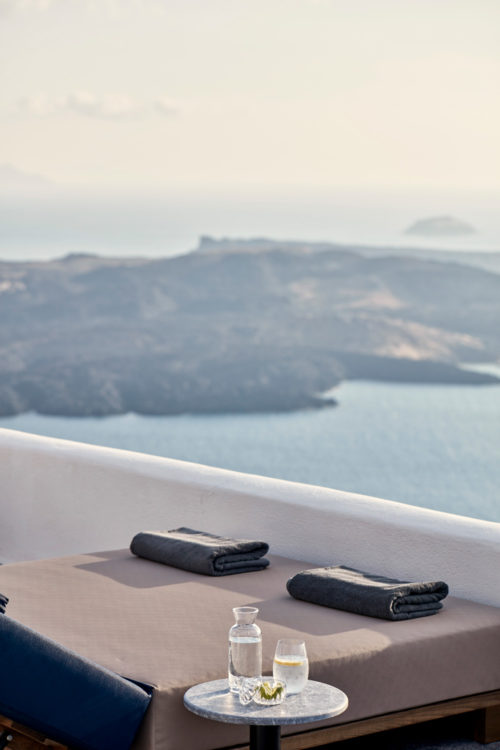 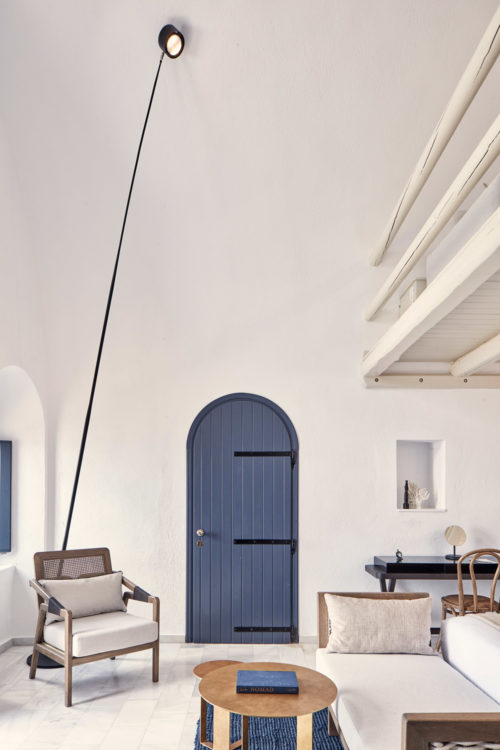 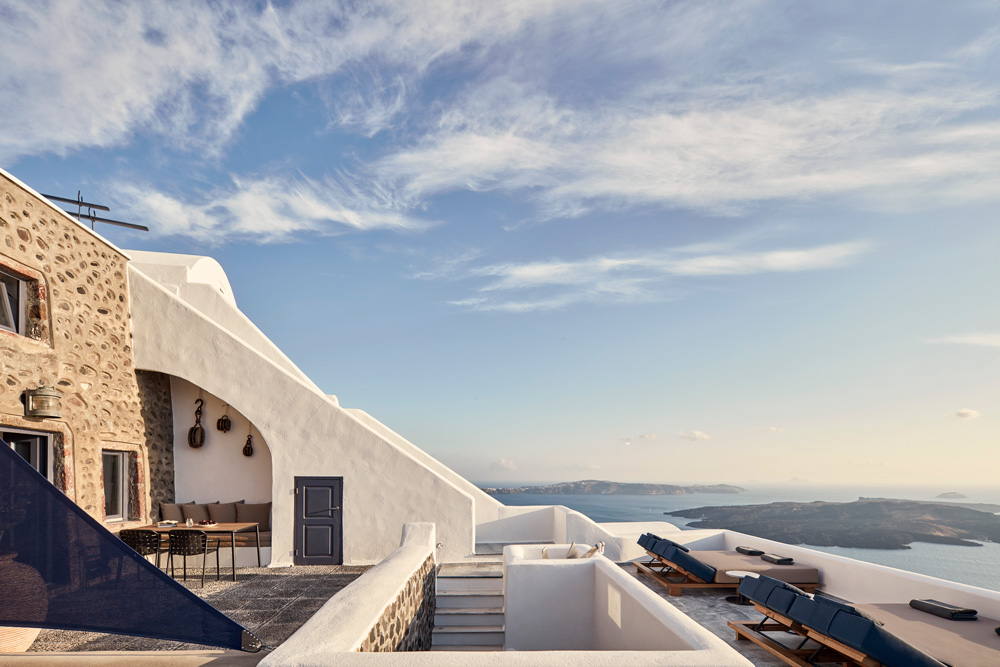 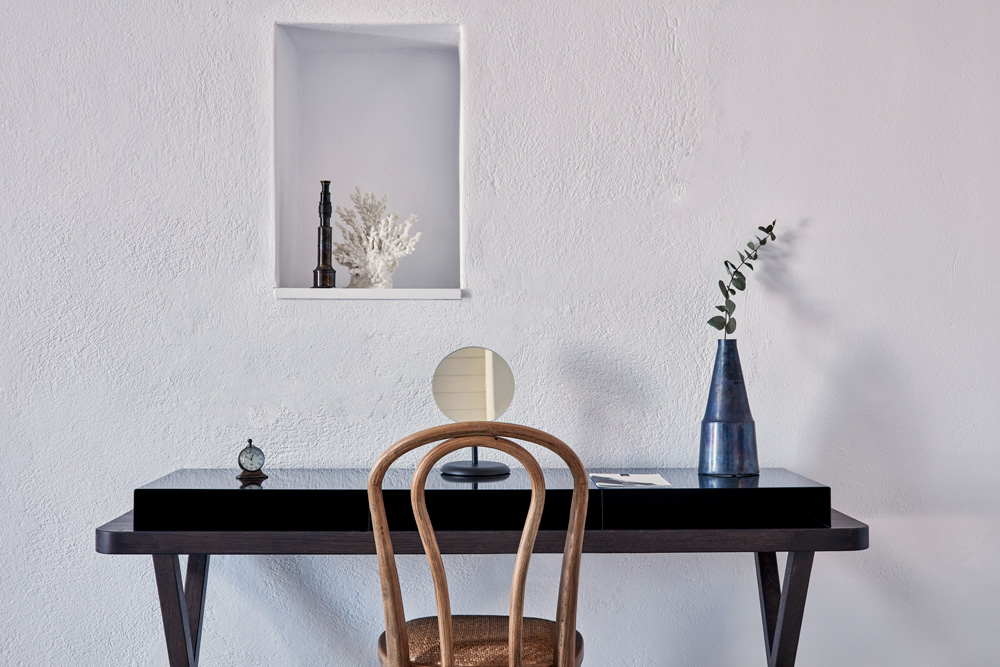 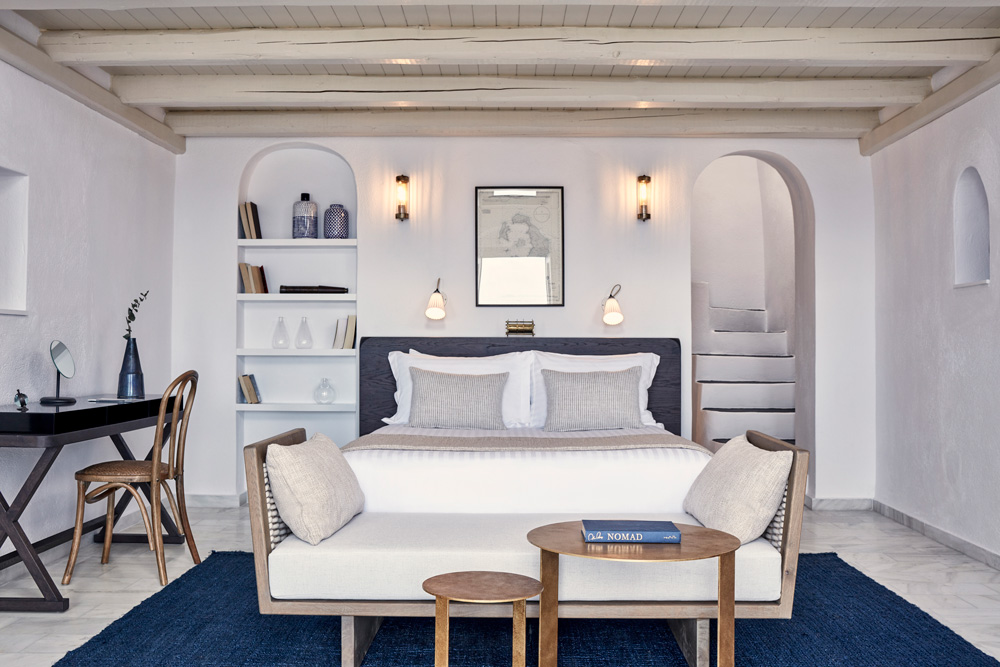 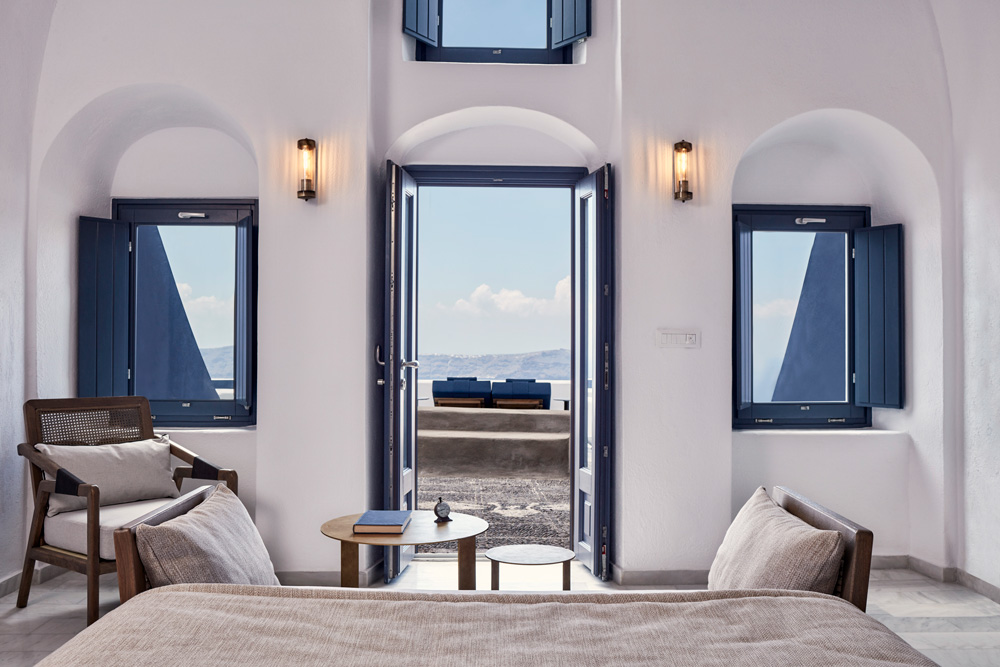 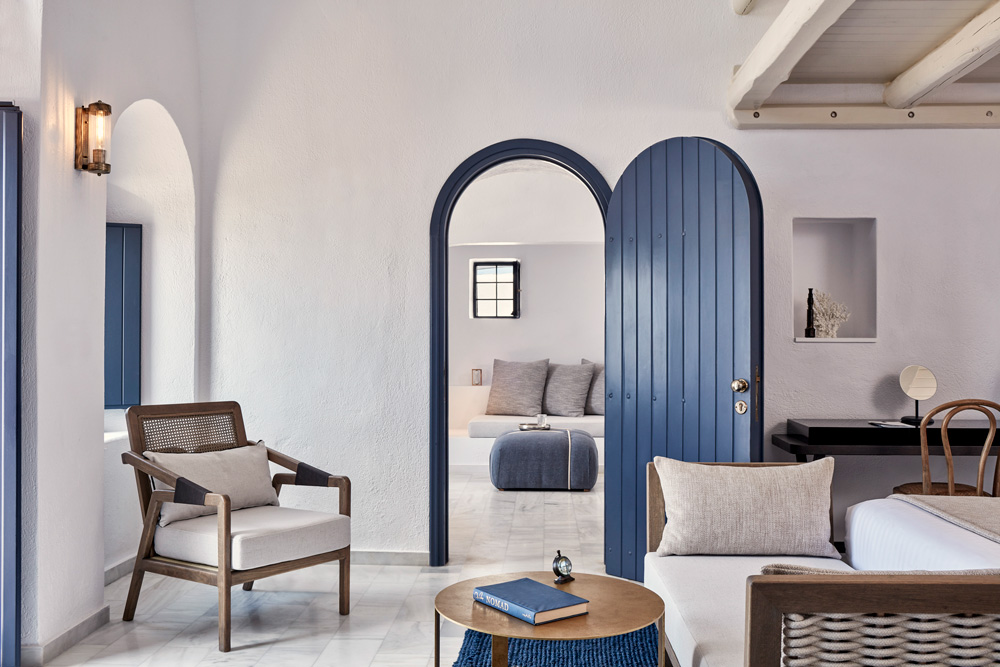 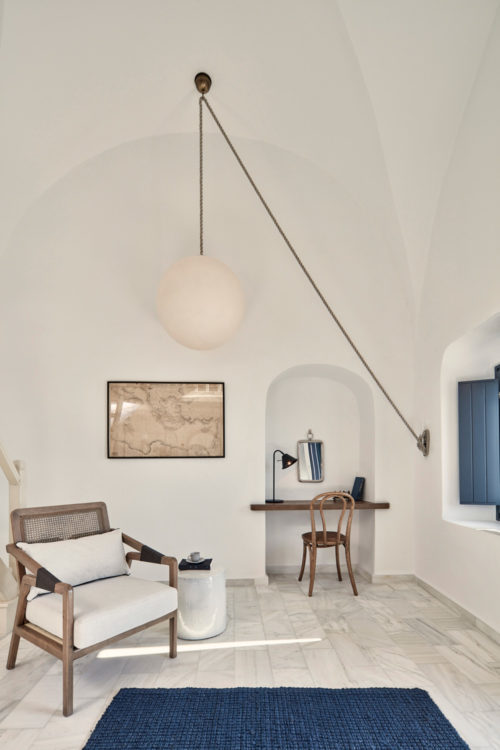 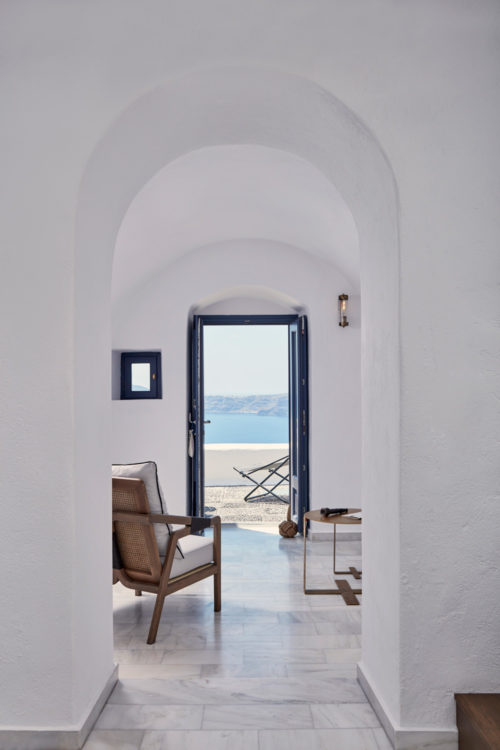 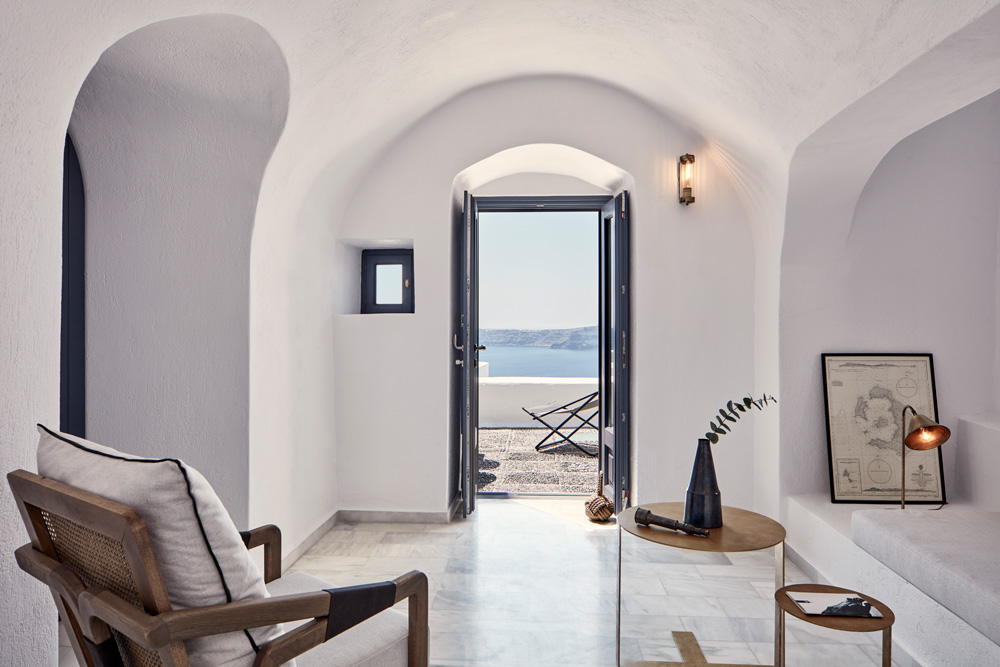 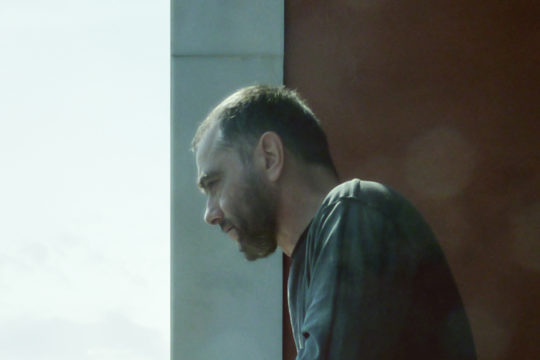