‘Urban Stripes’ is a flexible apartment building in the center of Athens that meets different demands and needs, and whose façade reflects the city’s ongoing urban and social circumstances. It is located in a largely residential neighborhood, built during the 60’s and 70’s following the typology of the ‘polykatoikia’ (typical Greek apartment building). Urban Stripes reinterprets elements of this typology, additionally using elements from the two important buildings of the area, the new museum of Acropolis by Bernard Tschumi and the old beer factory “Fix” by Zenetos.

The apartments are defined by their size, position, plan, section and their view to Acropolis. The façade is designed using linear openings at different heights that show or hide different pieces of the urban scenery, creating a direct relation to the adjacent balconies and the Zenetos building.

Living in the center of Athens today is dramatically different compared to when this neighborhood was built back in 1960-1970. Privacy and safety are very important, as the dense urban environment is dominant in the area, as well as the ability to control the view and what one wants or doesn’t want to see. Balconies are essential for apartments in Athens due to the city’s climate, but not to the extent that they used to be, additionally being hindered by the noise and pollution of Greece’s capital.

In such a grey city, the white color of the façade really stands out, also helping to reflect the intense sunlight during summer. The first floor is used for offices, and hence the façade is differentiated, creating a base for the building. The back façade offers a modern interpretation of the older back facades of Athens, using elements such as cylindrical stairways and ‘misplaced’ windows. Using colored laminated glass, Klab Architecture proposed a different view to the totally neglected back facades of the area, which suddenly become interesting.

Every floor of ‘Urban Stripes’ is different and each apartment corresponds to different demands and needs. As we get higher, the view of the Acropolis and the Parthenon is breath taking. After the 5th floor, the building volume had to recess due to Greek building regulations, hence a penthouse was created, with a transparent and vast glass façade, in an open ‘dialogue’ with the Acropolis rock that stands opposite. The penthouse is made by exposed concrete and glass and is extended across three floors. 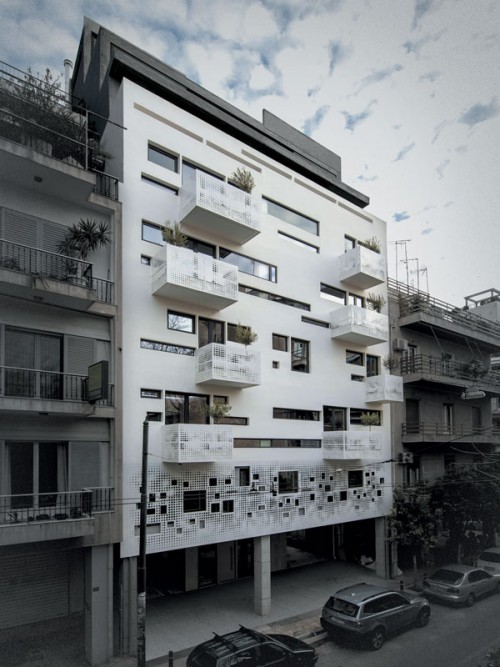 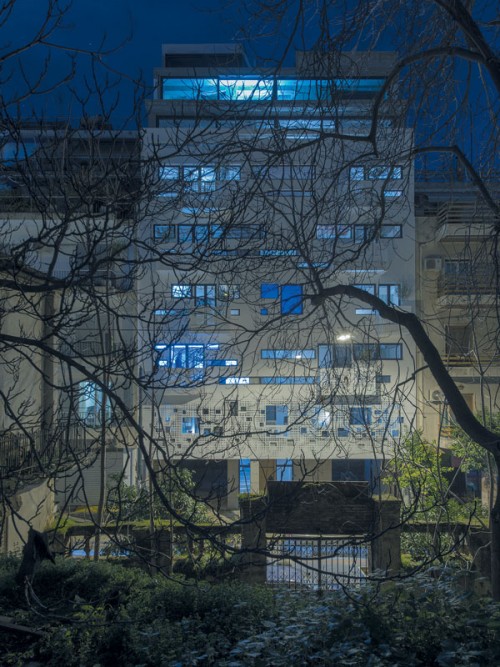 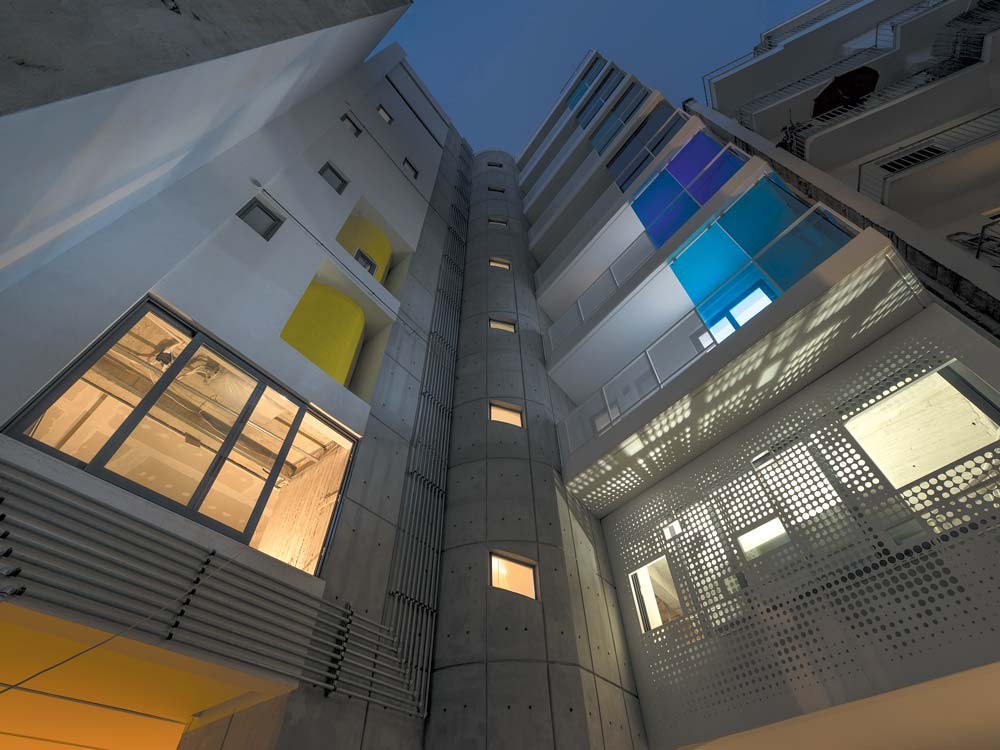 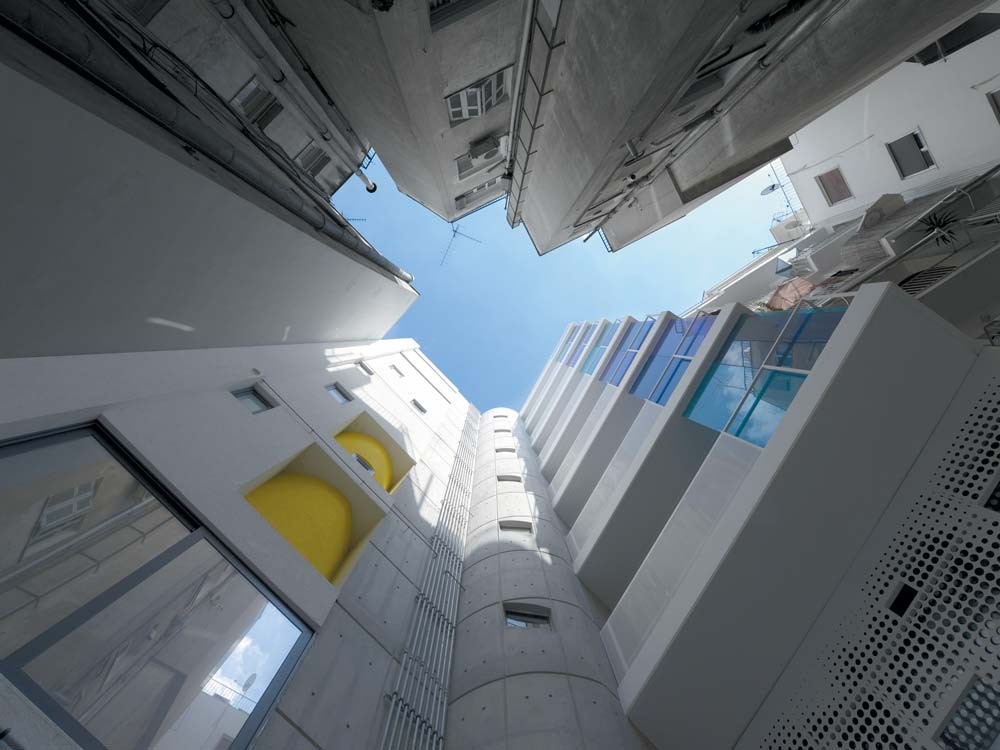 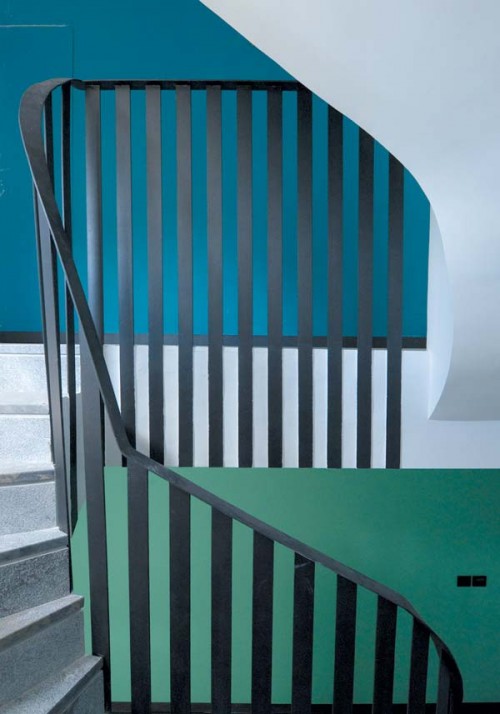 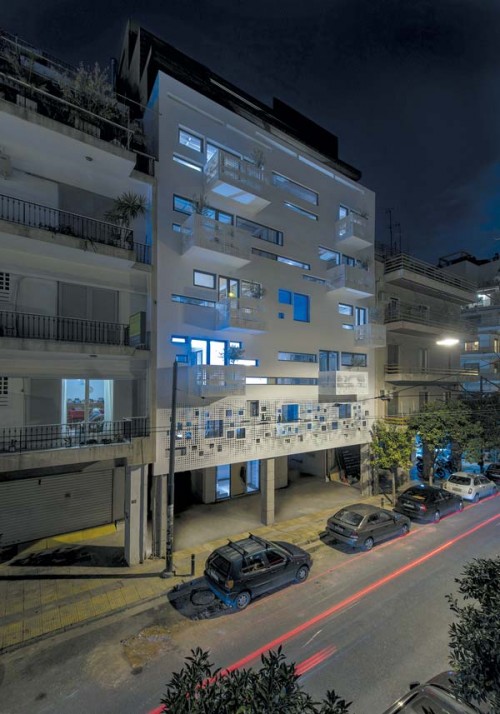 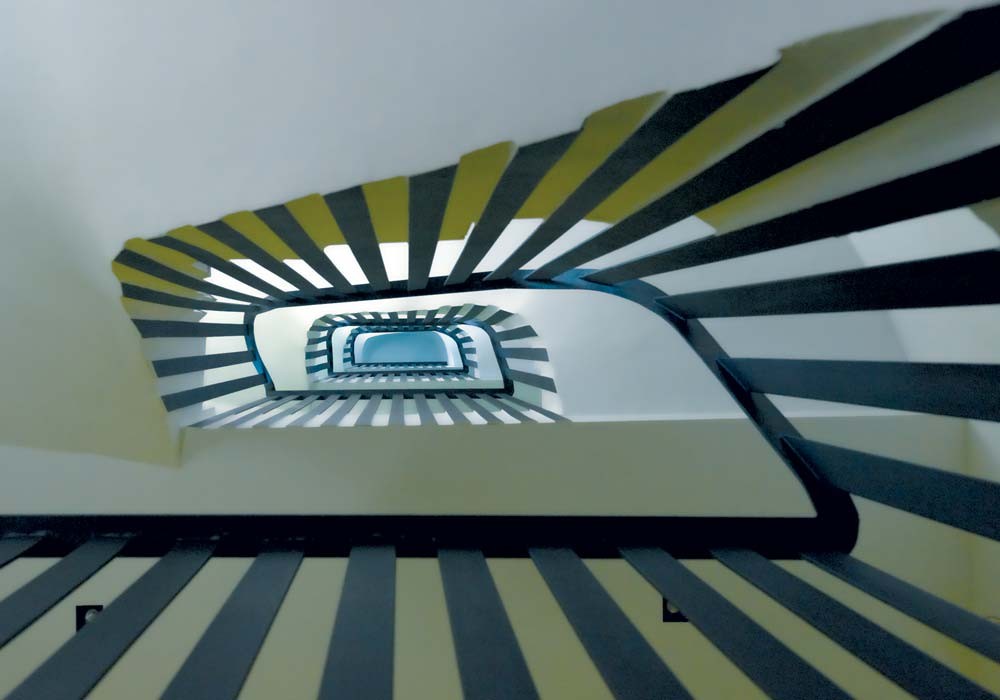 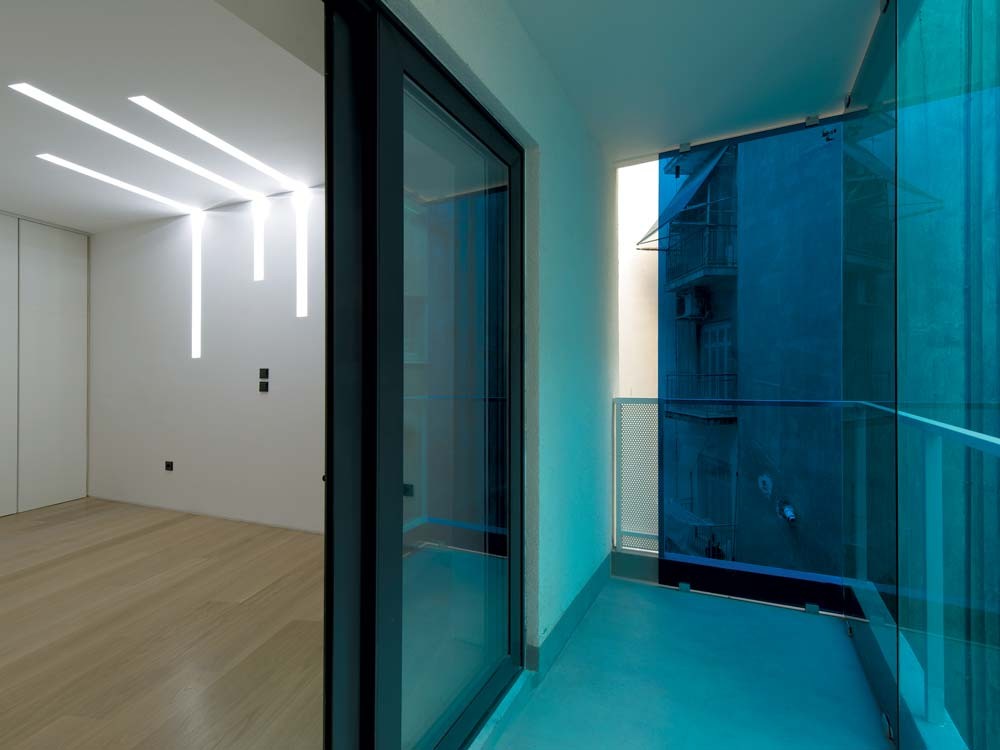 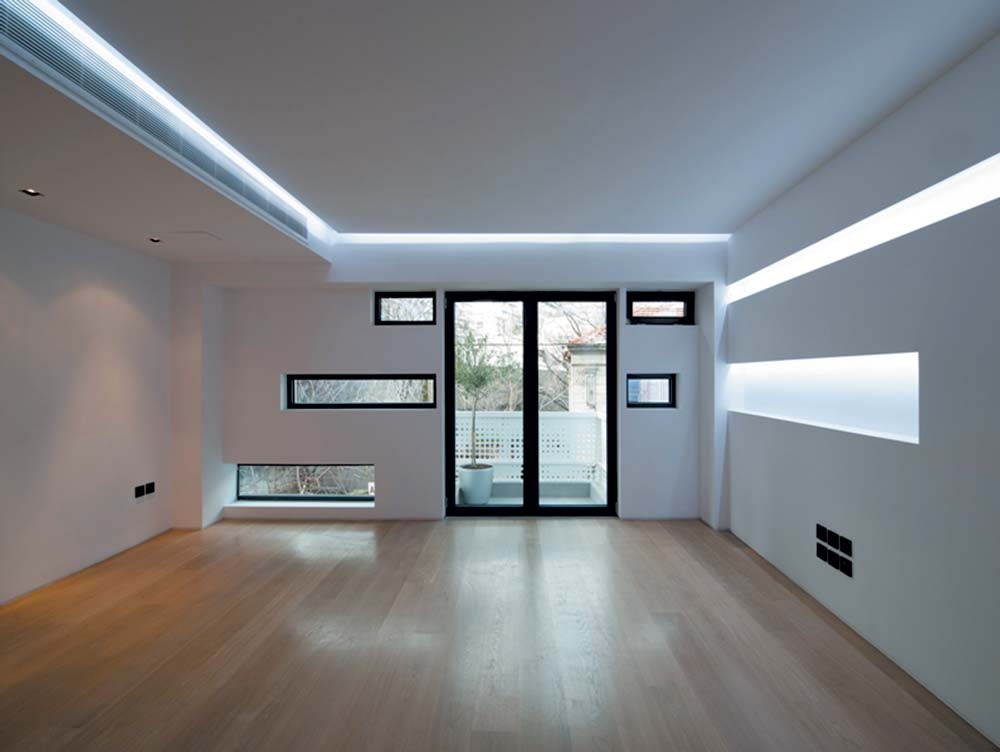 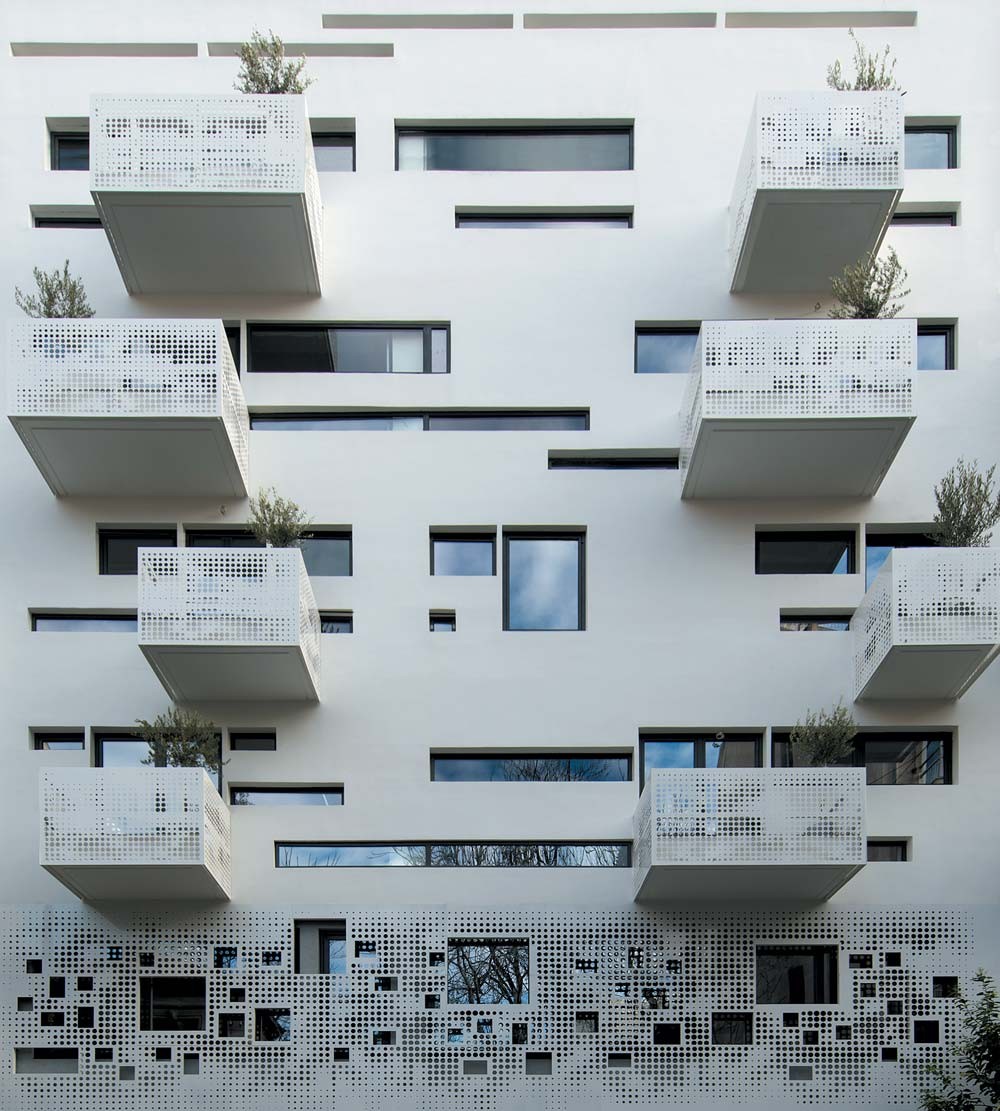